In 1580, The Prince Avtai sain Khan and his brother Tumenkhan met with the 3rd Dalai Lama and planned to establish a monastery on the ruins of Karkhorum, and the Tibetan Buddhism was declared religion of state in Mongolia. At its prime time, Erdenezuu monastery used to be not only the center of Buddhism of Mongolia but also was a centre of intelligence and culture, where sages and academics from different countries used to gather. During the political purge, only three temples and the outer wall with the stupas remained intact. The temples were transformed in museums in 1947.

After the fall of communism in 1990, the monastery became a place of worship again, where many pilgrims come to walk and gather their thoughts. Today Erdenezuu Monastery is famous for its ancient temple architecture, unique museum with rare exhibits. It’s certainly the first and oldestBuddhist monastery of Mongolia. Erdene Zuu Khiid is considered by many to be the most important monastery in the country, though no doubt it’s a shadow of what it once was. Not much is left of the fabled city But monastery is still ancient. The local souvenir shopping across from the parking would be interesting and enjoyable. 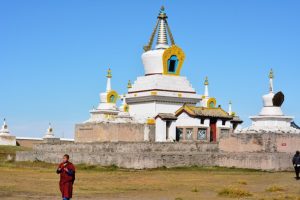