The ecosystem of Hugnu Khan National Park is particularly interesting because the steppe and the taiga meet here. So, we can find a fauna and a flora that are characteristic of these two ecosystems, and also some wonderful landscapes, with the granite formations of Khögno Khan. Created in 1997 as a natural reserve, it became in 2003 a natural park, that is to say an area protected by the State for its educative, historical, cultural or environmental value.

This is a magnificent place with mountains, forests, steppes, Gobi-type desert and mineral water sources all in one location. One of the main attractions of this area is Uvgun monastery which was built in 17th century by Saint Zanabazar who was a great sculptor and the biggest representative of Buddhism in Mongolia. During Middle Age feuds between Western and Eastern Mongolians (Dzungaria and Khalkh Mongolia) after the collapse of the Mongol Empire. The armies of Dzungarian leader Galdan Boshigt noticed the golden roofs of the temples in Khogno Khan Mountain and massacred the partisan-monks of the rival Zanabazar in 1640, killing them by tying their necks with a rope (the Mongolian verb for the action is khognokh) as if they were goats and sheep. This is the meaning of name of the mountain. After democratic revolution in 1990 the monastery was restored by the granddaughter of the monks who was living at the monastery. This area is pleasant for many activities such as hiking, mountain climbing and horse riding. Now the sacred mountain of Khögno Khan is a venerated mountain located along the edge of the borders of Övörkhangai, Bulgan and Töv aimags. Venerating the mountains is a tradition that comes from prehistoric times. Today, the mountains are venerated during national or local ceremonies. Anyone visiting a sacred mountain must bring something as an offering and will probably make a wish for the attention of the Spirit of the Mountain. We can’t climb a sacred mountain without any precise and important aim. 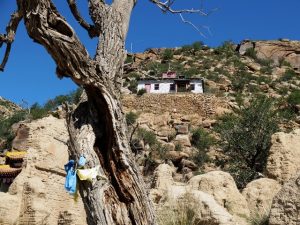 Set on the corners of three aimag provinces, the mountain has long been a sacred place for Mongolians, but walking between the mighty rock outcroppings now you are more likely to spy reclusive wild game and birds of prey than marauding hordes.