Chinghis khan’s choice of Karakorum as the capital of the Mongol Empire was no coincidence. The surroundingOrkhon Valley was the center of preceding nomadic empires for centuries and had enormous symbolic importance. The valley had attracted humankind since Paleolithic times some 750,000 years ago. Therefore Orkhon valley is one of the world’s most important cultural regions and recognized as a “Cultural Landscape” of the UNESCO World Heritage in 2004. The Orkhon Valley Cultural Landscape is the place to visit for anyone who wishing to follow the historical path of the Mongol Empire. Orkhon valley is boasts its’ natural beauties, making it one of the favourite places among tourists. You will witness unique lifestyle, culture and rare historical memorials. Beauty of Orkhon Valley, Orkhon waterfall formed by combination volcanic eruption and earthquakes some 20000 years ago cascades down from a height 27 meters. The Orkhon, longest river in Mongolia, begins at the state worshipped mountain Suvraga Khairkhan in the Khangai mountain range. The drainage basin of the river is 132835sq.km. 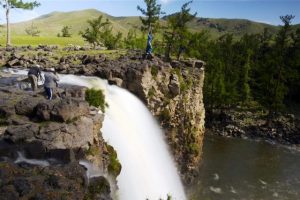 The river is 10-60 m wide to begin with but it becomes 120-150 m around the end and the speed of the river flow decreases. The area is ideal for fishing, horse riding, cycling and photography. The rivers have handful species of river fish such as pike, sturgeon, hucho taimen, common asp, Siberian grayling, roach etc. Scenic and untouched natural distinct spot allow good opportunities for hiking and horseback riding. There are many rocks and boulders around the river as well as some waterfalls like a small waterfall with 4-5 m height and the Orkhon (Ulaan tsutgalan ) waterfall biggest in Mongolia at a height of 26 m. The Orkhon river Valley has been protected since 2006 as a National Park.