The Baldan Bereeven Monastery itself is located in Jargalant river valley backed by steep cliff of sacred Munkh Ulziit Mountain and the valley is well watered by the Jargalant River and has long been renowned for its rich vegetation and pasture for domestic animals and now by famous herdsmen people. Such kind of natural environment has attracted nomadic people since prehistoric times until the present and is the reason for the association of this valley with cultural, religious and worshipping sites. Baldan Baraivun Monastery – had been the second largest Buddhist institution. At the end of the 17th century, the Khan of Mongolia invited Lama Tseweendorj to his court and asked him to build the monastery Bereeven somewhere in the east. The monastery was inhabited by 5000-6000 monks. It took nearly 76 years to complete the building construction, was started in 1700s and finished around 1776. For centuries the Baldan Baraivun monastery was famous for its many scholars, lamas, artwork, and cultural treasures. Behind the monastery special formation of rock which is called womb symbolizing rebirth.Between 1937 and 1939, religious persecution became common and a political opposition began to form. Almost all monasteries, like Baldan Baraivun, have been destroyed. At Baldan Baraivan, “The Yellow Temple,” the entire surroundings were destroyed and only the ruins of the buildings remain. For over 60 years it was forbidden to visit the monastery.  In 1990s a democracy in Mongolia, a number of monks reestablished some part of the monastery with the locals. The surrounding rocks of the monastery have been remained with its religious carvings which prove the history of that time. 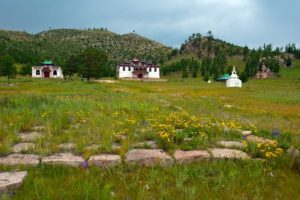 Now this monastery includes three restored temples and nearly 50 remains of temples, stupas and other religious structures. There are also many cliff carvings, stone carvings with different images of Buddhist gods, inscriptions of religious mantras and Mongolian symbol ‘’Soyombo’’, stone sculptures of gods, and other religious and art works along the over 1000 m of pilgrimage route.  They provide invaluable physical and historical materials for the research of spread of Tibetan Buddhism into Mongolia. They not only form a major religious and sacred landscape but also provide the vivid evidence of traditional affection of Mongolian people for the sacred mountain.