This lake is situated near Tsenkher River 35km north from the main road in eastern region and northwest from Tsenkhermandal Soum, Khentii Aimag. The full name of the lake is the Blue Lake of Black Heart. Black Heart is the pointed topped mountain on the north side of the lake. A fresh watered Lake Khukh which consists of 2 lakes, linked underground, is located on south of Mount Khar zurkh 1675m above sea level. 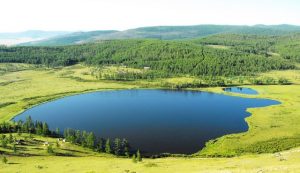 Area around the lake is a place of natural beauty surrounded by a mountain and is abundant of various species of animal and vegetation. Blue Lake is a very important place in Mongolian history particularly of Chinggis Khaan (Genghis Khan). In this place Temuujin was enthroned as a king of united tribes of Mongolia and titled as “Genghis khan” which means Oceanic great king in 1189. In the Secret History of Mongols, a chronicle book of Genghis khan’s life, place names such as Lake Khukh, Mount Kharzurkh and Sengur Gorkhi were mentioned. On a bank of the lake there is a monument dedicated to 840 years’ birth anniversary of Genghis khan and in a crescent-shaped area with a diameter of 108m surrounding the monument, woodcrafts of 36 royal or golden lineage kings were placed. On the central part of this establishment woodcrafts of Genghis khan, his father Esukhei, mother Oulen and his queen Borte Ujin were posed. Boards with deeds’ inscription of a particular king along with specific events of that period in English and Mongolian are in front of the kings’ woodcrafts. This memorial complex consists of 50 woodcrafts including 9 marshals of Genghis khan placed at two sides of the main gate.  The surrounding area of Khukh Nuur is quiet, peaceful and wonderful for hiking & relaxation.