Precipitous banks, hillocks, and hardened clay soil, mostly unchanged since Cretaceous period, blaze brilliant shades of red and orange at sunset- hence the name “Flaming cliffs” as dubbed by American paleontologist Roy Chapman Andrews on his expeditions to the region in the 1920s. Then as now the fossilized remains of dinosaurs, who roamed our planet 230 million years ago, still litter the ground everywhere, alongside dry saxaul shrubs, which can spring to life in an instant after a burst of rain. Only in the Gobi, where the dry wind and sand sweep away any signs of current life, could such a large quantity of fossils survive millennia remarkably intact. 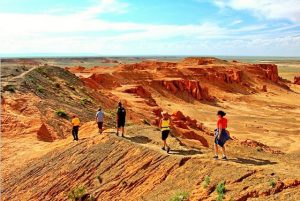 The third Asian expedition to the Gobi that was headed by U.S scientist Roy Chapman Andrews first discovered fossil dinosaur eggs in Bayanzag. Their findings proved to the world that dinosaurs laid eggs. Giant dinosaurs and boundless sea was once existed in this vast Gobi Desert. The majority of Gobi Desert is flowery vast steppes beautiful crags, towering dunes, salt marshes, and saline and green saxaul thickets. The Naitonal Geographic Society’s “Adventure” magazine selected the Mongolian Gobi as one of the tourism destinations of the world. 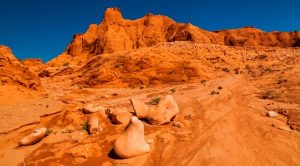