The 2 mountains with granite stone massifs and taluses located in Mongolian granite stone zone, Dundgove province are Ikh and Baga Gazriin Stones. Ikh Gazriin Stone covers more than 20km long area consisting of north and south parts. There are many special rocks named for their features of their shapes and figures such as, Uvgun Chinghis (Old Chinghis), Lusiin ezen (Lors of the Sea), Khaan Khatan Hoyor (king and queen), Zagasnii am (mouth of fish), Camel rock, Mother’s womb and Penus rock. There are also over 10 small caves created by the wind and rapid temperature changes including several caves of Ulziit Sumber Mountain, in the east part of Ikh Gazriin Stone. The biggest one is Toonot Cave with 27m length. 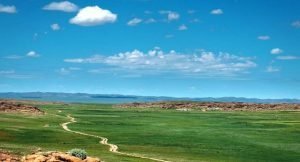 An open air theatre was founded in the centre of Ikh Gazriin Chuluu in 2006 on the occasion of 800th anniversary of the Establishment of Mongolian Statehood and it stage was surrounded by sharp and flat rocks in the west, north and east sides. International Music Festival ‘The Roaring Hooves’ was organized on the stage of the open air theatre in 2007. A beautiful monument dedicated to Mongolian state honored long song singer Norovbanzad.N stands in the mountain for the memory of the great singer. 35000 hectare km area of Ikh Gazriin Stone have been protected since 2003 as Natural Reserve according to decree number 30 by Mongolian State Khural and protected as strictly protected area since 2012.