Going through the Khermen Tsav seem like travelling through ancient city ruins with many religious stupas and temples. This area was bottom of the ancient sea and now is wonderful geological exhibition. Khermen Tsav with special landscape is big escarpment and is located 120-130km northwest of Gurvan Tes sum centre, the escarpment is 12 to 15 km long and approximately 3 km wide, but it becomes more than 10km wide and and 100 to 120 km deep at the end. This kind of landscape is internationally called ‘Badland’ while Mongolians called it ‘Tsav’. Deposits in Khermen Tsav includes yellow, red and white lime stones look like marble and crystal. Those deposits are dated back to geological Cretaceous Age. 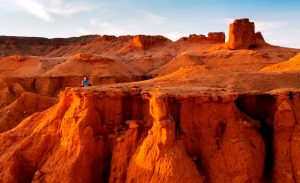 One can see her some canyons look like mammoth, laying camel and crocodile. Deser eagles, lizards, some reptiles and insects are here. There are some small oases. Khermen Tsav is registered in UNESCO as a wonderful natural valuable. The American archaeologist Roy Chapman Andrews named this place “The end of the World”. Khermen Tsav is famous for its natural beauties, as well as for its bountiful underground fossils of dinosaurs. Besides it’s not unusual to find some in the place.