Buddhism was introduced to Mongolia three times. First one was in the period of 6th century from India. Second introduction took place in the beginning of the 13th century. Third one was during 16th century. For Mongolians, Tibetan Buddhism became as way of unifying people and creating a sense of nationalism in 16th century.
One of the biggest reason of Buddhism spread in Mongolia is that in 1578, Abtai Khan — one of Mongolian most influential military leader invited the high-ranking monk from Tibet. Altan Khan (also known as Abtai Khan) gave the title of Dalai Lama for the first time to that spiritual leader of Tibet. Dalai can be translated as “ocean.” Dalai Lama means “Ocean of Wisdom”. Moreover, Avtai Sain Khan ordered to build the Erdene Zuu monastery in Karakorum in 1584.

Afterwards Yondonjamts, grandson of Abtai Khan was recognized as a reincarnation of third Dalai lama in 1589 and Buddhism quickly became dominant religion in Mongolia.
Next biggest reason that Buddhism became dominant religion in Mongolia is that Under Gegen Zanabazar became “lama king” of Mongolia, Like the Fourth Dalai Lama, he also was a direct descendent of Chinggis Khaan.
From 16th century to 20th century, more than 2,000 monasteries were constructed and almost 40 percent of male population became celibate monks. Large monasteries had hundreds of monks and schools for art, astronomy and theater. They regularly organized religious dramas and festivals. Education in Mongolia was managed by Buddhist monasteries and only monks had access to it.
Buddhist lamas became very influential and powerful. Some lamas were like princes and rich class with serfs. By the 20th century, Buddhism had spread deeply into Mongolian culture.
During Communist period, Government banned Buddhism and other religions. Every activities and ceremonies related to Buddhism was forbidden. In the 1930s anti-religion purge was started by the Mongolian government under Stalin’s influence. Within two decades, 700 monasteries were destroyed; monks number was reduced from about 15,000 to approximately 200 monks. Gold and silver religious objects were transported to the Soviet Union and melted down to make bullet. But people still believing in Buddhism at home. Standing beside portraits of Lenin on the family alter were images of Buddha. Some lamas buried religious treasures to dig them up when it was safe.
In 1985, there were only 100 lamas in Mongolia.  Buddhism had played so large part in the country’s history, traditional arts, and culture in the last.
Buddhism revived and flourished once more after with the collapse of communism and the establishment of democracy in Mongolia in the 1990s. More than 155 Buddhist monasteries were reopened and rebuilt.
Today 50% of the Mongolians are Buddhists, 39% of population is not religious, 3% are Muslims, 3% of them are followers of the Mongol shamanic tradition, 2% are Christians, and 0.4% are followers of other religions. 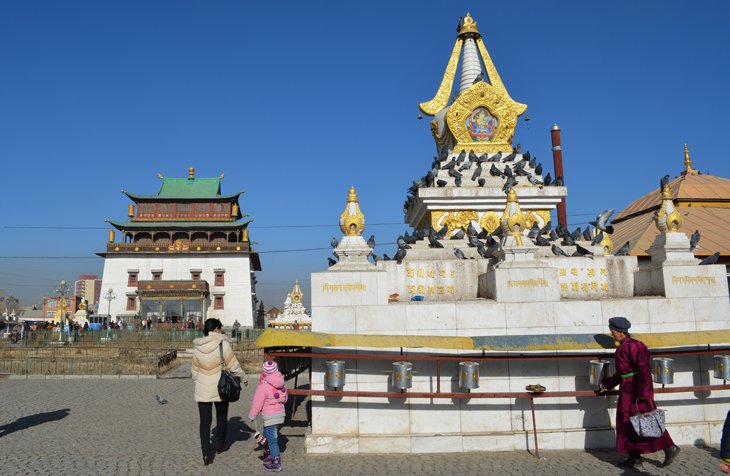