What is Mongolian Ger?

What is Mongolian Traditional Ger?

Mongol Ger: For thousands of years, nomadic herders of Mongolia roamed across the country-side from season to season.
In the country where pasture always was and still is a public domain, the herders moved freely to the best locations for the season. With this lifestyle of freedom of movement and pastoral animal husbandry was invented the national dwelling called the “Mongol Ger”.  It is a round structure of easily dismantle-able walls, polls and a round ceiling covered with canvas and felt, tightened with ropes. The Ger was designed to be light enough for Mongolian nomads to carry, flexible enough to fold-up, pack and assemble, sturdy enough for multiple dismantling and assembling as well as easy for regulating temperatures within.

Over many centuries the Mongol Ger was modified into a perfectly aerodynamic structure, 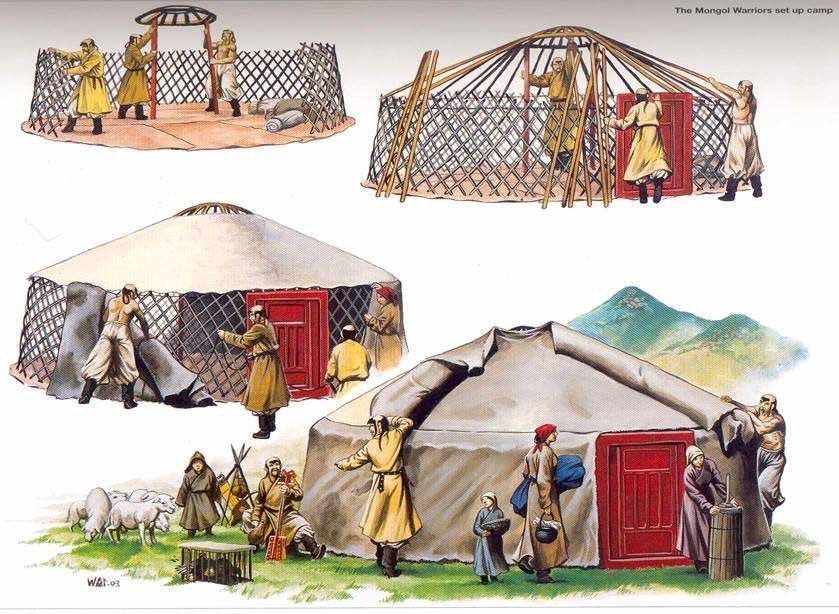 which can withstand Mongolia’s fierce spring winds ranging up to 18-20 m/sec. It can be dismantled in half an hour and assembled in an hour by a small family with 2-3 adults. Mongol Ger has many varieties. The most common “5-wall Ger” consists of five lattice segments forming a circular wall, a door, a Toono (round window ceiling), two Bagana (columns that hold the toono), and 88 Uni (long poles that connect wall lattices and Toono which forms the roof of the Ger), where on this frame are placed three to four layers of felt, traditionally made from sheep’s wool, and an outer layer of waterproof canvas.
Wooden structures painted and embellished with traditional Mongolian ornamentation; covers made of white felt and white canvas; ropes made of animal hair; flooring and carpets made of hand-sewn felt.
“Ger” in Mongolian language generally refers to traditional dwelling-place, but goes with other meanings such as home, household or family, and the word “ger” also means a case. 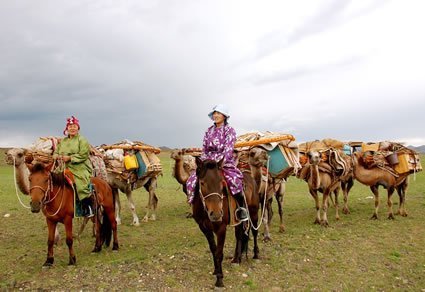 Portable: A Yurt is easy to assemble, dismantle and carry (Picture: A Nomadic herder is moving his yurt homes). Depending on the size, a yurt can be assembled or dismantled in anywhere from thirty minutes to three hours. After dismantling, the various parts of the yurt are loaded onto camels, horses and ox carts for transport. As nomadic herders move at least three or four times a year in the search for good grazing lands, this feature is of essential importance. During times of war, ancient nomadic warriors were constantly on the move and the portability of yurts provided them with an opportunity to carry their homes with them wherever they went.

Air circulation: A Ger has an opening in the center of the roof, which is called the crown or toono. Because the crown is located at the top, fresh air regularly circulates through the yurt as cold air flows down and hot air flows upward.
Because the crown is located in the middle of the roof, the air coming through it reaches every part of the interior, providing fresh air for every one regardless of where they are in the yurt. 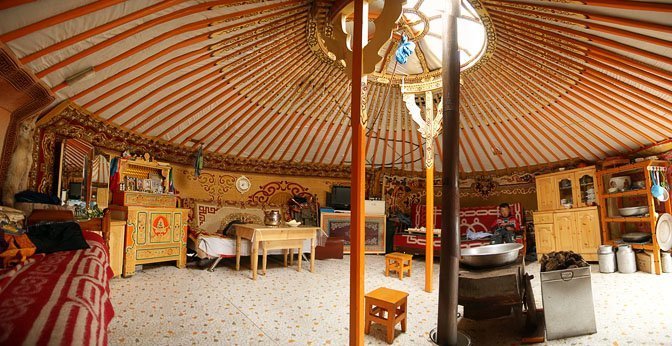 Easy to heat and cool: The temperature in Mongolia ranges from -31 to + 104 degrees Fahrenheit (-35 to +40 degrees Celsius) depending on the season. The yurt is designed to be adapted to provide comfort to its inhabitants in both cold and warm conditions. The central wood-burning stove provides heat evenly throughout the yurt when required, with extra layers of felt added wrapped round the structure in the coldest months to provide insulation. (Picture: Ger interior)