The most colorful and biggest holiday event Mongolia Naadam Festival is known as “Three manly sports” including archery, wrestling and horse racing. The festival is registered with the Intangible Heritage Fund of UNESCO.
The Naadam Festival held all over the country on 11-13th of July each summer, originated many centuries ago as a test of courage, strength, daring, horsemanship and marksmanship, all necessary for a nomadic people and warriors. The largest celebration is held in Ulaanbaatar beginning on July 11.
Herdsmen, many from distant places, converge on the city to view and take part in horserace and wrestling and archery competitions, the three manly sports and winners are richly rewarded with fame. Wrestling, archery and horse racing are held during the first and second days. Very little happens on the third day. 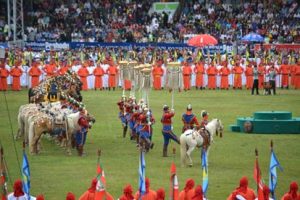 Naadam Festival Opening Ceremony – which starts at about 11 am at the Naadam Stadium in Ulaanbaatar, includes an impressive march of monks and athletes, plenty of music, most colorful and amazing parades. The first round of the wrestling, which starts at about noon on day one in the main stadium, is the more interesting and photogenic. 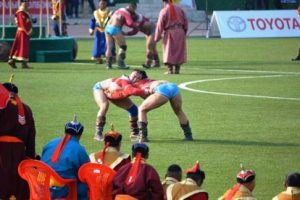 Mongolian National Wrestling
Mongolian Wrestling contests at Naadam, 512 or 1024 wrestlers meet in a single-elimination tournament that lasts nine or ten rounds. As there is no weight class. Before the contest wrestlers perform an eagle dance to limber ups and displays their fine physiques.
The costume of the wrestler consists of great heavy, decorated boots, a small long sleeved top with bare chest and even smaller pair of briefs. The pride of Mongolia is the wrestler. The men participating in this event are revered by all Mongolians and the winner is given the most prestigious title of “Lion”. 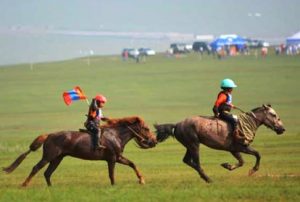 Mongolia Naadam Horse Racing
Horse racing is the favorite sport of the herders who bring their best horses from great distances. Unlike Western horse racing, which take place outside the city on the steppe over distances from 15 to 30 kilometers, are a test of endurance for the horses and riders, boys and girls.
The riders are aged from 6 to 12 Mongolian children of these ages are good riders, as both boys and girls have been riding since infancy. Both child and horse are decorated in bright silks and ribbons for race day.
During the races, up to 1000 horses gathered from every corner of Mongolia can be chosen to compete divided into six categories based on the age of the horses. For example, two-year-old horses race for 10 miles (16 kilometers) and seven-year-olds for 17 miles (30 kilometrs). Race horses are fed a special diet. 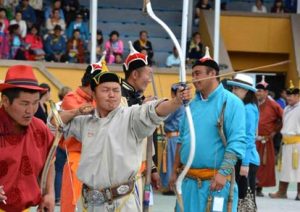 Naadam Festival Archery
Archery contests continue a tradition dating from the time of Genghis Khan when they were intended to sharpen military skills. Contestants use compound bows fashioned from sinew, wood, horn and bamboo, and strung with bull tendon.
Men fire 40 arrows made from willow branches and griffin vulture feathers from a distance of 75 meters and women deliver 20 arrows from 60 meters at a target.
In accordance with ancient custom, several men stand on either side of the target singing a folk song to cheer the contestants and then use hand signals to indicate the results. 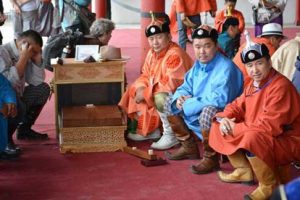 Naadam Ancle bone shooting game
Ankle bone shoots – Another popular Naadam activity is the playing of games using shagai, sheep anklebones that serve as game pieces and tokens of both divination and friendship. In the larger Nadaam festivals, tournaments may take place in a separate venue.