Asia’s largest desert Mongolian Gobi was once paradise for plants and animals, including dinosaurs. Many paleontologists say that it was also a site of mass extinction, where avalanche-like sudden sand-slides both swept dinosaurs away and preserved their remains. Gobi Desert is the place that the first proved dinosaurs laid eggs. First in 1922, famous Roy Chapman Andrews, director of the American Museum of Natural History led the paleontological expedition into the Mongolian Gobi.
Since that Soviet, Polish, Japan and Chinese teams led paleontological expeditions into the Gobi.
World famous fossils from Gobi Desert include: the “Two fighting dinosaurs (Velociraptor and Protoceratops)”, “Crowded infant dinosaurs – Protoceratops”, “Oviraptorosaur laying its eggs”, “Giant carnivorous Tarbosaur and its baby” and “Egg fossils of many different dinosaur species, and an embryo in egg.”
In 100 years of dinosaur research, more than 80 genera of dinosaurs or 1/5 (one fifth) of the over 400 dinosaur genera known to science, have been found in the Mongolian Gobi.
Belows are most famous dinosaur species which was found in Mongolia.

What is the list of Dinosaurs found in Mongolia? 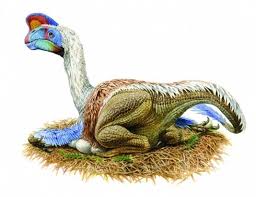 Oviraptor is a genus of small Mongolian theropod dinosaurs. When living, Oviraptor was one of the most bird-like of the theropod dinosaurs. Oviraptor means “egg-plunderer”. Its called this because the first fossil of Oviraptor was found fossilized on top of Protoceratops eggs. Then Andrews thought the eggs belonged to a dinosaur called Protoceratops and that the Oviraptor was trying to steal them. In the 1990s scientists discovered that the eggs actually belonged to Oviraptor and these fossils were the first known evidence of dinosaur had eggs in 1920s.
American Museum expeditions also found male and female members of another Oviraptor relative called Khaan fossilized together. They were introduced to the public as “Romeo and Juliet”.

Protoceratops (small hornless relative of Triceratops)
Protoceratops andrewsii, was one of the new species of dinosaurs found in the Flaming Cliffs. It’s a small and herbivorous dinosaur. Like Triceratops it walked around on four legs, had a big frill, a bony extension of the head which covered the neck, and had a beak. But it didn’t have Triceratops’ Horns.

Tarbosaurus (relative of Tyrannosaurus)
It’s also named T- Bataar. Tarbosaurus was the king in the Late Cretaceous of Mongolia just as its close relative Tyrannosaurus was king in North America. It’s called Asian T.rex, Tarbosaurus was a big carnivorous predator. The largest known individuals were between 10 and 12 m length and 4000kg. In 1946, a joint Soviet-Mongolian expedition to the Gobi Desert turned up a large skull and some vertebrae in the Nemegt Formation. Tarbosaurus is known from relatively abundant and well-preserved fossil material. In fact, one quarter of all fossils collected from the Nemegt Formation belong to Tarbosaurus

Velociraptor
Velociraptor is more famous because of Jurassic Park movie. It was 5-6.5 feet and 1.5-2 metres and was covered in feathers. It’s size was like a contemporary turkey, although with a longer tail. In 1923, Ry Chapman Andrew team first discovered Velociraptor from Flaming Cliffs (Bayanzag). In 1971, a Polish Mongolian team found one of the most famous fossils ever discovered called “Two fighting dinosaurs”. It was Velociraptor locked in an attack pose with Protoceratops.

Therizinosaurus
Therizinosaurus was one of the weird dinosaurs known. Only fossils of its arms and legs have been found. They were large and had massive claws. Its diet was plant. When the arms were first found, scientists thought they had found a turtle. Therizinosaurus were discovered in Nemegt Formation in 1948 by a joint Soviet-Mongolian expedition.

Zanabazar
Zanabazar is a troodontid dinosaur that is named after the first spiritual head of Mongolia. It was from late cretaceous Mongolia. It was the largest Asian troodont and was originally classified as a Saurornithoides. In 1974, Rinchen Barsbold descovered from the Bugeen Tsav of the Nemegt Formation, which is dated to about 70 million years ago. Zanabazar was a carnivore.

Usefull links: Where discovered the Dinosaur Fossils in the Mongolian Gobi