Amarbaysgalant is beautiful monastery located northwest of the centre of Sant sum in the valley of the Iven River. It is said that construction work lasted 16 years, at the end of which over 50 temples were built, with as many as 6000 resident lamas able to recite scriptures in the main hall. The monastery is dedicated to prince Zanabazar and built by the order of Enkh Amgalan Khan of Manchu empire. 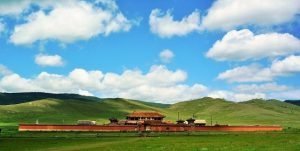 During the political purges, most of the temples and statues were destroyed. Many ruins found in the surrounding areas of today’s Amarbaysgalant monastery prove the site was once huge construction in earlier times. After three centuries, only 28 temples survived to date. It has been protected in 1943 and was a registered in the world’s cultural heritage by UNESCO in 1996. Presently, 30 monks reside in the newly restored monastery ranging in age from 7 to 90.