* A private tour price is based on a group of 2 adults sharing one room.
* If there are more people in your group, there will be more discounts on the tour price.
* This tour package can be fully customizable to fit your travel plan between 1 Jun and 15 Sep!

What’s included in the Price?

What’s NOT included in the Price?

Welcome to Ulaanbaatar, the capital city of Mongolia. Upon arrival, you will be greeted by Amicus driver in the arrivals hall at the international airport and transferred to your hotel. After check-in, free at leisure and have a good rest to recover from the jet lag. If you feel like going for a walk and checking out places nearby, feel free to ask the hotel receptionist for recommendations.
Accommodation: Hotel 4*. Meals: None

At 8am, guide will pick you up from your hotel and visit “Gandan” Monastery, Mongolia’s largest functioning Buddhist monastery. Listen to the horns calling lamas and monks to temple, and capture the monks’ daily rituals while visiting the adjoining Megjid Janraisig and Temples. The temple houses feature a 26-meter-high majestic gilded statue of Migjid Janraisig.
Continue to visit Museum of Mongolian National History – the museum presents Mongolian history and culture from prehistoric times to the present day.
Afterwards, Sukhbaatar square which is lies at the heart of the city surrounded by important buildings such as government palace, banks and theaters and post office. There is an equestrian statue of Sukhbaatar and a massive Bronze statue of Genghis khan with his four warriors in front of Parliament House.
In the afternoon, visit “Choijin Lama Temple Museum” – built in the first decade of the 20th century for the younger brother of the last religious ruler of Mongolia who was also the state oracle. The temple/museum is situated in the center of Ulaanbaatar. It has a fine collection of arts and religious relics, including tsam masks and costumes used in religious dances. It is known as one of the most beautiful monasteries in Mongolia
Next visit Bogd Khan Palace museum – the complex was a residence of 8th Bogd Javzandamba in 19th century, the head of Mongolian religion. The palace consists of seven Summer Prayer temples and the winter palace.
Our next highlight is a famous cultural show in the city, which is featuring traditional performances by singers, dancers and contortionists. It’s a great chance to hear Khöömii (throat singing) and see some fabulous costumes. After dinner, transferred to the hotel.
After dinner, transferred to the hotel.
Accommodation: Hotel 4*. Meals: B, L, D.

After breakfast, at 8am we will drive to Hugnu Khan Mt. National Park
Hugnu Khan Mt. National Park is a picturesque area of Rocky Mountains, semi desert, Gobi sand dunes and steppes all in one location represents three different natural zones. There is ideal for hiking, wild life observation and photography.
Check-in and lunch at tourist Ger camp. It is a kind of hotel that serves guests with Ger (yurt) instead of a hotel room and always located at the best viewing spot.
In the afternoon, explore the around and visit Erdene Khamba temple – now being restored which is destroyed during the purges of the 1930s.
Also, we will visit camel herder family near to the Elsen tasarkhai sand dunes, explore their nomadic lifestyle which has not changed for centuries. There, we will ride two-humped Bactrian camel and explore the around for ~ one hour.
Return to the Ger camp for dinner and overnight.
Accommodation: Tourist camp. Meals: B, L, D.

We will travel through Orkhon Valley Cultural Landscape for next 3 days, which is an encompassing an extensive area of pastureland on both banks of the Orkhon River and includes numerous archaeological remains. It was registered by UNESCO in the World Heritage List as representing the evolution of nomadic pastoral traditions spanning more than two millennia.
Today, depart to Orkhon waterfall – is one of the most visited tourist attractions in Central Mongolia. The height of the waterfall is about 20m (65 feet).
On the way, visit Shankh temple, which is one of the oldest and most important monasteries of Mongolia. It was founded in 1647 by Zanabazar who was the first leader of Mongolian Buddhism.
In the afternoon, we will explore the waterfall. The area is ideal for horse riding and photography.
Accommodation: Tourist camp. Meals: B, L, D.

After relaxing breakfast, drive towards to Tuvkhun temple. The temple is located on a rocky mountain hill surrounded by forests at the top of the mountain in a secluded area. It was built by the great sculptor and one of the biggest representatives of Buddhism Zanabazar. It was a place of his for meditation and artworks and he made his world-famous creations in this temple.
In the late afternoon, we will check-in at small Ger camp which is belongs to the local nomadic families. There, you will experience a daily life of the local nomadic family in Khangai region. There is available to help and participate their daily works and interact with the locals.
Accommodation: Tourist camp. Meals: B, L, D.

In the morning, head to Kharkhorin, a small village, and one of the country’s major tourist destinations. Historically known as Karakorum, which was an ancient capital of Mongolia Empire founded by Genghis Khan in 1220. Also, Karakorum was one of the most important cities in the history of the Silk Road.
Visit the museum of Karakorum and learn more about the beautiful ancient Karakorum city and Genghis Khan.
Continue to visit the magnificent and the oldest Buddhist Monastery complex of Erdenezuu, built in the 16th century, with 108 Buddhism stupas. Here you can see interesting listen to monk chanting Buddhist sutras.
In the late afternoon, we will take 1.5hrs drive to Ugii Lake, it is a pure water steppe lake, which is 7.9km long, 5km wide. The lake Ugii is a famous for its birdlife. Ogii lake has registered in the Ramsar Convention for being important breeding and staging area for a variety of waterfowl.
Dinner and overnight at Tourist Ger camp on shore of the lake.
Accommodation: Tourist Ger camp. Meals: B, L, D.

After relaxing breakfast, towards to Bulgan province.
We will travel through alpine forests, gradually blending in the arid steppe plains of the central Mongolian highland.
Overnight at local hotel in Bulgan town.
Accommodation: Tourist camp. Meals: B, L, D.

Today, we will travel to Amarbayasgalant Monastery via Erdenet city which is Mongolian second biggest city based on Copper Molybdenum Mining. Brief tour through the city and visit Buddha statue.
After lunch, towards to the Monastery. This monastery is the second largest monastery in Mongolia, was originally built in 1737 by the Manchurian king Kansu, who dedicated it to the great Mongolian Buddhist and sculptor, Zanabazar.
Upon arrival, explore the around and hike up hills with Buddha sculptures.
Accommodation: Tourist camp. Meals: B, L.

This morning, we will explore the Monastery and enjoying the morning chanting ceremony. There are around 30 resident monks conduct their daily ceremonies.
After lunch, depart to Mongolian Secret History camp which is located best viewing spot and surrounded beautiful nature.
Accommodation: Tourist camp. Meals: B, L, D.

Free at leisure until lunch time. You can hike and walking around the nature.
In the afternoon, return to the city. On the way, we will visit Aglag Creation Temple – is a small Buddhist temple is surrounded by scenic forested mountains with interesting rock formations and sits at top of the mountain. Breathe in the cool air of the forest valley with a stunning hike through temple creature and sculpture and feast the eyes on its stunning ornament.
Upon arrival in the city, transferred to the hotel.
Accommodation: Hotel 4*. Meals: B, L, D.

You will be free at leisure in your hotel or wander around on your own until being escorted to the Chinggis Khaan International Airport for your departure flight home. End of service. Meal: Breakfast

Q: How to book this trip?

Q: What about the payment options?

Q: What kind of accommodation for this trip?

You will stay in a good 4-star hotel in Ulaanbaatar. An upgrade is possible on request!
During the excursion in the countryside, you will stay in Tourist Ger camps.
Tourist Camp is a kind of hotel that serves customers with Ger (Yurt) instead of a hotel room and always located at the best viewing spot. It’s the most popular accommodation type for a countryside trip in Mongolia that consists of 30-40 Gers (Mongolian traditional yurt), a restaurant and some entertainment facilities.
Most visitors happy to stay in Ger, which provide an authentic taste of Mongolian culture and adventure, their most enjoyable experience in Mongolia.
More information and pictures: What is the Tourist camp?

Q: What about the meals?

During your trip in Mongolia, you will be served mainly European dishes and sometimes authentic Mongolian foods. Lunch and dinner consist of 3-4 courses (soup and/or salad, main course, dessert) and bottled water.
If you require special meals due to religious, medical limitation and vegetarian food, please inform us so that arrangements can be made in advance.

Q: What about the transport and road conditions for this trip?

Car: A good car is an important part of your comfort trip in Mongolia. There will be a good 4×4 car for this trip based on the number of people in your group. 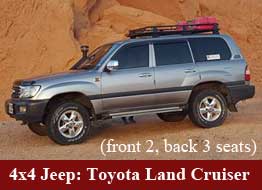 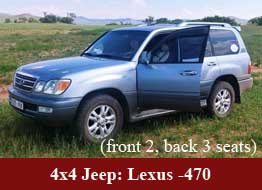 Road: The asphalted roads are 40% and the unpaved roads are 60%.
During the trip, it takes approximately 2-6 hours driving (80-280km) from one to next destination depending on road and weather condition on each driving day. But it is not nonstop drive! We can take a short stop frequently everywhere along the road for photographs, toilets, stretch and meet with local nomads.

Q: The best time to do this journey?

Q: Personal things you should bring with you: