Irkutsk is the sixth largest city in Siberia, the capital of the Irkutsk region, Russia. It is located in Eastern Siberia, on the banks of the Angara River, at the confluence with the Irkut River (hence the name of the city), 66 km to the west of Lake Baikal, about 5,200 km to the east of Moscow.

Irkutsk was founded in 1661. That time, it was a small settlement playing the role of a gold and fur trade center. The settlement received the status of a town in 1686. Later, in 1760, the Siberian Road connected Irkutsk with the European part of the Russian Empire. It was the reason of further economic growth of Irkutsk.
From the beginning of the 19th century, Siberia in general and Irkutsk in particular became the place where a lot of Russian officers and nobles were exiled for taking part in Decembrist uprising.
At the end of the 19th century, about 30% of Irkutsk population consisted of exiles. It was one of the reasons why the city became the cultural and educational center of Siberia.
Electricity came to Irkutsk in 1896, the first theater – in 1897, and the railway station – in 1898. Irkutsk had the nickname “Siberian Paris” at the beginning of the 20th century. The city was one of the centers of Bolshevik Revolution resistance during the Russian Civil War
The city and surrounding territories were heavily industrialized during the Soviet period.

Usually, tourists come to Irkutsk on their way to Lake Baikal and stay in the city for 1.5-2 days. About 70% of tourists come during the summer season. In the vicinity of the city, there is the architectural-ethnographic museum “Taltsy.”
The city has a philharmonic with a concert and organ halls, a symphony orchestra, four state theaters, and four state museums.
The climate in Irkutsk is sharply continental. The average temperature in January is -17.8 degrees Celsius, in July – +18.3 degrees C.
Irkutsk is an important transportation hub. Trans-Siberian Railway and the federal highway “Baikal” go through the city. There are two airports: Irkutsk International Airport and Irkutsk Northwest Airport.

Irkutsk is one of the few cities in Siberia, which managed to preserve its historic character and original layout. Its historic center was formed on the site of a wooden fortress, the remains of which were dismantled in 1790. Today, Irkutsk has about 700 monuments of wooden architecture.
Church of the Saviour (Sukhe Bator Street, 2) is the only surviving building of the fortress. Together with the Epiphany Cathedral , they form the oldest architectural ensemble of Irkutsk.
Another prominent ensemble of the city is located on the waterfront of the Angara, in the beginning of Karl Marx Street. It is formed by the monument to the founder of Trans-Siberian Railway – Alexander III, the local history museum with round corner towers made in the Moorish style, and Sibiryakov’s Palace, better known as the “White House”, which served as the residence of the governors-general in 1838-1917. 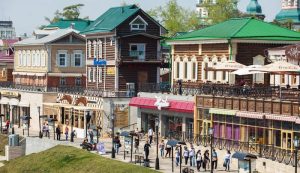 On the main streets of the city – Karl Marx and Lenin, intersecting with each other – you can find a lot of monuments of stone architecture of the late 19th – early 20th centuries. The main pedestrian street is Uritsky Street.
In 1930-1940s, buildings in the style of Soviet constructivism appeared in the city. Monumental art of the Soviet period is represented by the memorial complex “Eternal Flame”, the monument to Vladimir Lenin, the monument to the fighters of the revolution, and others.
Among the monuments emerged after the collapse of the Soviet Union, there are the restored monument to Alexander III and the triumphal arch Moscow Gates. Until now, many streets of the historic center retain their Soviet names.