The small but tourist-wise village of Listvyanka is located on the shore of Lake Baikal, 70 km from Irkutsk. Russian pioneers came to this spot in the middle of the 17th century, and a hundred years later there was a outpost here. The settlement grew along with the development of navigation on Lake Baikal. This old-style Siberian village, situated at the source of the Angara River, is famous for its trade history. From the 18th century a ferry took merchants across the lake on their way to Mongolia, China and the Far East. 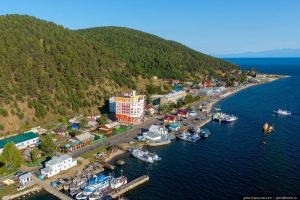 Despite its modest size Listvyanka is one of the busiest tourist centers in the whole of Siberia. Due to its proximity to Irkutsk, it sees probably more visitors than all other towns and villages on Lake Baikal combined – particularly weekending locals and foreign tourists. Village is relatively overdeveloped, with a tourist-oriented market, picnic areas and a plethora of hotels and cafes. 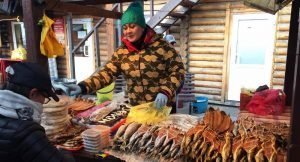 Listvyanka is the site of the Limnological Institute of the Russian Academy of Sciences. It studies the lakes and man-made reservoirs of Siberia and the Russian Far East, with particular focus on Lake Baikal. The institute has a small but very interesting museum of the flora and fauna of Baikal and its region. Population of Listvyanka is about 2,300.