The Gun-Galuut Nature Reserve is protected in order to conserve threatened species. Citizens representing Khural (local Parliament) in the sum of Bayandelger, province of Tov, created the reserve in 2003. It’s composed of three zones: one is “touristic” and open to visitors, another one has a restricted access, and the last one, central, is forbidden which are the ecosystem of steppe, rocky mountain, small lakes, river, streams and wetland, and it is about 20000 hectare. The harmonized complex of high mountains, steppes, rivers, lakes and wetlands as well are kept enough as its original condition.
The advantages of Gun-Galuut is no overcrowd of people mixed with domestic tourists although it’s located just 130 km from Ulaanbaatar capital city and easy access of driving (just for 2 hours) make this area to become the most attractive place for the tourism. 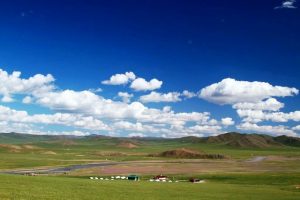 The area of Gun-Galuut Nature Reserve is elevated averagely 1200 m above sea level. Gun Galuutai is home to argali sheep, grey wolf, fox, lynx, manul cat, badger, hare, marmot, mice and etc., Gun-Galuut Nature Reserve has numerous lakes and pools. The largest one in size are Lake Ikh-Gun (88 Sq.he) and Lake Ayaga (13 Sq.he). Many species of waterbirds spend summer at these 2 lakes, namely, gulls, ducks, geese, swans, cranes, storks etc..,
Moreover, Gun-Galuut Nature reserve is rich with many clear rivers including the River Kherlen, one of the longest in Mongolia, River Ayaga, River Shinebulag and River Galuutai and so on. All are rich in fish. Currently 38 species of fish are observed in the River Kherlen which flows from the Khentii Mountain range.