Capital of present day Mongolia was founded in 1639 as a nomadic Buddhist monastic centre which was dedicated to Mongolian first head of Buddhism. Ulaanbaatar city with a four hundred year history settled permanently at its present location, the junction of Tuul and Selbe rivers in 1778. Like nearly half of total population, the capital city itself is nomadic. It changed location twenty-eight times, with each location being chosen ceremonially. The triumph of the Democratic Revolution in 1921 led Ulaanbaatar toward the rise of modern architecture and an urban development era. In the twentieth century, Ulaanbaatar grew into a major manufacturing center.
Ulaanbaatar has a history to honor, stories to tell, picturesque landscape to present, mysterious temples and monasteries, fancy modern buildings. Its population as of 2016 was over 1.4 million, almost half of the country’s total population. 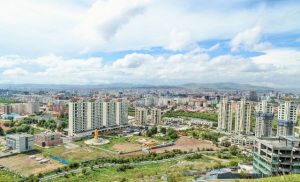 People who have visited Ulaanbaatar witness its unique beauty. The traditional Mongolian felt Ger stands among a modern glass skyscrapers. People dressed in business suits rubbing shoulders with people in Mongolian traditional dressing (deel) on the downtown boulevards are unique scenes of the city that elicit excitement about the mixture of Western and Eastern cultures and contrast between modern and traditional lifestyles. Contemporary Ulaanbaatar is a rapidly evolving, expanding and fast growing metropolitan city. A railroad and an international airport connect the city with China and Russia. The scenic wooded peaks of the Hentiyn Mountain extend to the northeast of the city. We assure that Ulaanbaatar offers something surprising and exciting for everyone.