The National Museum of Mongolian History was founded in 1991. It provides an excellent overview of history and culture of Mongols from ages as early as the Stone Age and up to the modern days. Among 15 thousand exhibits of the museum are carpet and silk items of the Hun period and leather boots of a Mongolian soldier of that time.
Its’ must see for all first time visitors to learn about the great 2000 year old tradition of Mongolian statehood. Visiting this museum before travelling anywhere in Mongolia will give you good knowledge of country’s tradition and nomad lifestyle that you can see in real life later. 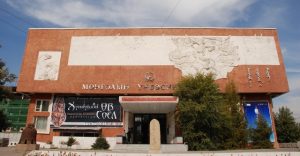 It has 11 halls including the Ancient history, Ancient States, Traditional clothes and jewelry, Mongol Empire, Culture, Traditional lifestyle, 16-20th century Mongolia, Mongolia under Bogd Khaan, Socialist Mongolia, Democratic Mongolia and a temporary exhibition hall.
The 1st floor has some interesting exhibits on petroglyphs, deer stones (stone sculptures of reindeer and other animals) and burial sites from the Hun and Uyghur eras. The 2nd floor houses an outstanding collection of costumes, hats and jewellery, representing most of Mongolia’s ethnic groups.
The 3rd floor is a must-see for fans of the Mongol horde. The collection includes real examples of 12th century Mongol Armor, and correspondence between Pope Innocent IV and Guyik Khaan. Written in Latin and Persian and dated November 13, 1246, it bears the khan’s seal. There is also a display of traditional Mongolian culture with, among other things, a furnished Ger, traditional farming and domestic implements, saddles and musical instruments.