Zaisan is a popular tourist attraction and one of the highlights of Ulan Bator due to the fantastic views it offers over the city. You can also get an aerial view over the yurt districts, and see how many cranes there are rapidly altering the city skyline with brand new, soviet-style apartment buildings. There are views of surrounding hills, one of which has the Mongolian national Symbol painted on the slope in white. The memorial includes a 10 meter high statue of a Russian soldier holding a flag, and a circular concrete area on which there is a mural. 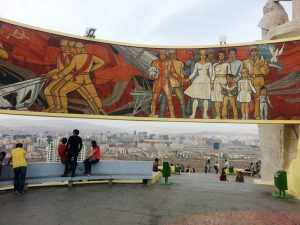 The Zaisan memorial was erected to commemorate those killed in the WWII between Russia and Germany and Mongolia and Japan and the ensuing peace between these countries. The monument is a popular day out during public holidays and the summer months. The Memorial stands on a hill overlooking the city and consists of a circular mosaic depicting the armistice between the four countries. The outer skin and the statue are made from high quality Russian concrete, at the base of the hill there is a very large statue of Buddha popular with worshippers and visitors to the country. Buddha Park features a 23 meter tall statue of Buddha. It is worth to check out the tank exhibit at the foot of the hill.