Mongolia revere our king’s wisdoms rather than his conquests. Nowadays you can see many tributes to Chinghis Khaan, a man of the millennium. One of them is a gigantic statue of Genghis Khan on the bank of Tuul river. It is 40 meters tall and wrapped in 250 tons of gleaming stainless steel. 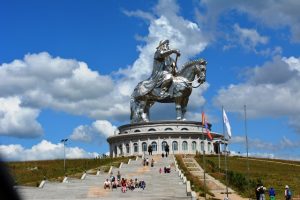 The equestrian statue of Genghis Khan was built in 2008 on the occasion of the eight-hundredth anniversary of the foundation of the Mongolian Empire, in honor of its founder, Genghis Khan. The people of Mongolia honored him by erecting the world’s largest equestrian statue in his likeness. Located 34 miles from Ulaanbaatar in an area known as Tsonjin Boldog, It’s the currently the highest statue representing a man on a horseback in the world. The statue is turned towards East, towards the conqueror’s place of birth. It stands on a 10-metres high base that is surrounded by 36 columns representing the 36 kings Mongolia experienced during its history, from the first one, Genghis Khan, to the last one, Ligden Khan.